Wheatley Group has unveiled £185 million of new funding from the European Investment Bank (EIB) to help build and improve thousands of affordable homes across Scotland. 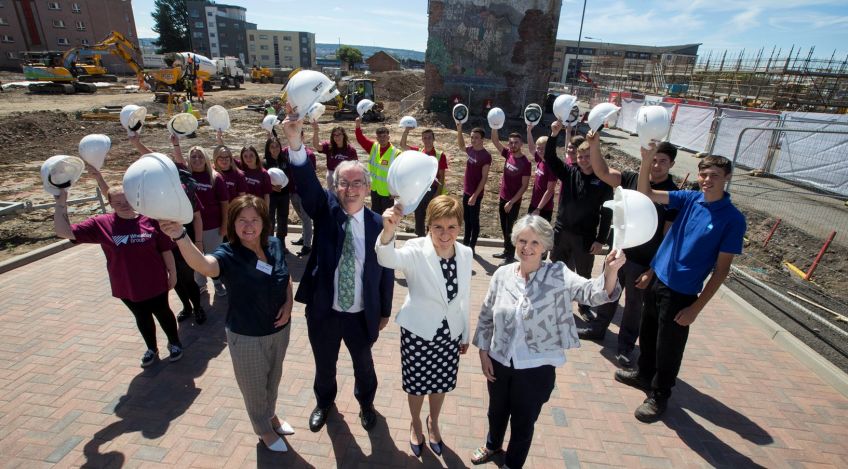 The landmark deal was announced in Glasgow by EIB Vice President Jonathan Taylor at a community event attended by Scotland’s First Minister Nicola Sturgeon MSP and tenants, staff and apprentices from across Wheatley, along with local politicians and business, community and social housing leaders.

It takes the amount of funding raised by Wheatley in the past four years to £800M and comes in the week the Group was confirmed – for the second year running – as the UK’s largest builder of social-rented homes. Wheatley is progressing an ambitious building programme, from 2015 through to 2025, of 7500 affordable new homes from Balloch and Dumbarton through Glasgow, West Lothian and Edinburgh to North Berwick.

The EIB loan, by far the largest of its type made in Scotland, is linked to a commitment by Wheatley to invest £400M over the next three years in affordable housing. This also includes refurbishing existing homes to meet new Scottish and EU energy-efficiency standards, helping tenants cut energy bills, and housing and integrating refugees into Wheatley communities.

Wheatley Chair Alastair MacNish said: “This loan is fantastic news for people and families across Scotland and is a huge vote of confidence in Wheatley and our unyielding commitment to affordable housing.

“It will help us to consolidate our position as the UK’s largest builder of social-rented homes, which we hold close as a badge of honour at a time when the availability and supply of affordable housing is such an acute priority.”

Speaking at the funding announcement at the Reidvale Neighbourhood Centre in Gallowgate, Glasgow, where GHA, part of Wheatley Group, is building 143 homes, Jonathan Taylor, EIB Vice President, said: “New investment in social housing is crucial to increase the number of affordable homes and cut heating bills in existing properties. The European Investment Bank supports social housing investment with leading housing associations across Europe and is pleased to back transformational investment here in Scotland by Wheatley, the largest housing association in Scotland and the largest builder of new social housing in the UK.

“This week’s visit to Glasgow provides a valuable opportunity to see how upgrading existing properties and construction of new social housing will improve lives, create skilled jobs, benefit local suppliers and cut heating bills in homes for hundreds of families.”

Wheatley has completed almost 1900 homes over the last three years and is building or planning up to 3000 more on 60 sites across Scotland. The new £185M EIB loan, along with future investments, will enable Wheatley to maintain a building programme of around 650 homes a year from 2021 to early 2025.

First Minister Nicola Sturgeon said: “Ensuring people have access to quality housing is a fundamental part of building a fair and equal society. That is why we have committed to deliver at least 50,000 new affordable homes in the five years to 2021.

“Wheatley Group is vital in helping us achieve that, having delivered almost 1,900 new affordable homes across Scotland over the past three years and the additional funding from the European Investment Bank will help them build on this. It is also another reminder of how Scotland benefits from the EU and its institutions.”

Wheatley has completed almost 1900 homes over the last three years and is building or planning up to 3000 more on 60 sites across Scotland. The new £185M EIB loan, along with future investments, will enable Wheatley to maintain a building programme of around 650 homes a year from 2021 to early 2025.

“But it is about so much more than simply bricks and mortar. Wheatley’s mission is to make lives, not just homes, better. This wonderful investment by EIB will enable us to do just that.”

Pictured below: First Minister Nicola Sturgeon is joined by dozens of apprentices in Glasgow's Gallowgate area to mark the EIB funding deal to help build and improve affordable homes across Scotland. Tenants have praised ‘brilliant’ Wheatley Group staff for ‘fighting their corner’ in helping them with benefit claims.

Wheatley Group has announced a significant boost to tackling homelessness and rough sleeping in Scotland.